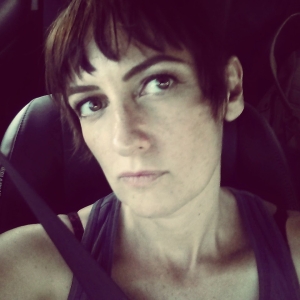 She has 6 GCSEs, 1 AS level, 3 A levels, 1 National Diploma in Foundation Studies in Fine Art, an BA (Hons) Fine Art (Film and Video) from Central St Martins, an MA in Philosophy from Birkbeck and a PhD in Gender Studies from Sussex University.

Previously considered careers include barrister (has GCSE Law), psychologist (has A Level Psychology), actress (has A Level Theatre Studies) painter (has a Foundation Studies in Art) singer and philosopher.

As a young teenager, Anna was anti-porn, believing it to be an area in which men were given free reign to subjugate the woman for their own needs. This was during the late 80’s at the height of the ‘ban the top shelf’ campaign led by Clare Short in the UK. She then had a moment of clarity walking down Old Compton Street in the red light district of Soho, London. She deconstructed her feeling of anger and found it was based on envy. She was envious of men because they had their Soho and a society, which considered their desires worthy enough to invest money to cater for them. What was missing was the equivalent – but very different in content/style – for women. She believed a woman should have the subconscious confidence to know that even if she doesn’t personally want to use porn, the world in which she lives recognises that she might want to and has a right to do so.

Anna is a member of Feminists Against Censorship; a campaigning group that understands that to be a woman who strongly believes in equal rights between the sexes does not necessarily mean the means of achieving this is through restricting and censorship of the rights of the individual, male or female. Censorship only proves to change the direction of the censored thoughts, not eliminate them and Anna believes that open debate is better than hidden inequality. She believes that to sexually objectify, that is to fleetingly view a person’s sexual attractiveness separately from their personality/person, is a natural human experience, not just a male one, as traditionally depicted.

As part of a campaign for a more female friendly pornography – believing that the female pound will make the industry more female friendly – Anna has been interviewed in almost every national newspaper and women’s magazine in the UK and others in Germany, Spain, France, Norway, South Africa, Brazil and Australia. Media appearances include every major BBC Radio channel and several BBC and commercial local channels including appearing on Woman’s Hour (twice), Newsnight, BBC World Service, The Today Programme and PM. She has appeared on all of the major terrestrial TV channels including Channels 4 & 5 who both aired two different, one-hour documentaries about her work as the face of feminist pornography. Anna wrote a weekly article about the adult industry for The Sport national newspaper for 12 months in 2008/2009.

Anna’s film work has been written about by academics and cultural theorists such as Prof Clarissa Smith, Dr Anne Sabo and CD Alexandersen; by international safe sex educators Anne Philpott and Wendy Knerr and by industry professionals such as Violet Blue, Gerrie Lim and Xavier Mendick.

Anna is a liberal and open-minded individual who politically supports The Liberal Democrats, for all their sins. In 2010 she became the first member of the adult industry to run for parliament campaigning on issues of equality, especially the rights of women and young people. She spearheaded a successful press campaign, which included coverage in every major newspaper, including The Times where she appeared on the front page and was interviewed at length about her feminist beliefs. Although Anna did not win the marginal Conservative/Labour seat she did increase the number of votes in the area for the party by 30% on the previous election’s results.

Anna has a chapter in Pornographic Art & The Aesthetics of Pornography from Palgrave Macmillan called My Pornographic Development on how she developed her creative style.

In September 2015 academic publishers, Ashgate Publishing will publish Anna’s book based on her thesis called Rethinking Misogyny: Men’s Perceptions of Female Power in Dating Relationships. The publishers have described the book as “path-breaking” and as having “political worth”.

Anna is married to Tim Arrowsmith who is studying for a PhD (at The London College of Fashion), and who is included in this BBC documentary about British bike culture aired in October 2013.